APS Victoria has honoured Mr F J C (Fred) Rogers (refer to tab below) by naming these bi-annual seminars the “FJC Rogers Seminars”, in recognition of his magnificent service to the Society and to uphold Fred’s desire that members should continue to be educated about specific groups of plants. 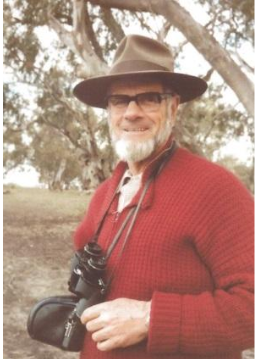 In 1954, Arthur Swaby published his ideas of forming“Australian Growers of Australians” The encouraging response resulted in the inaugural meeting on 12th March 1957 – held in Melbourne’s Horticultural Hall in Victoria Street. At this meeting this group was blessed with its name,”The Society for Growing Australian Plants” (SGAP) – South East Region”.

In the first few years Groups were founded in Capital cities, and generally based upon State boundaries.

By the beginning of 1964 the South East Region had grown to 700 mostly enthusiastic members who lacked leadership and direction.

Apart from his activities at the local level, Fred as a foundation member of the Society, became President of the South East Region in April 1963 and held this role until May 1968. He set about the task of moving the Society forward.

Fred quickly showed himself to be a leader and a man of knowledge and action so during his term of office the Society grew from 700 members to over 1200.

An additional seven District Groups were formed during Fred’s term as President. In March 1966, Fred called a meeting to his home in Ringwood and the “Maroondah Group” was formed with him as the inaugural President, a position he held for the next 5 years.

Fred was the convenor of the South East Region flower shows from 1964 to 1971 held at the Lower Melbourne Town Hall. He also conducted Council of Adult Education courses on native plants.

He took a keen interest in all South East Region activities and participated wherever he could. He was frequently listed in newsletters as the organizer of excursions and often led them. He was a keen propagator and mention is made of him providing and planting shrubs in many school grounds mainly in the eastern suburbs of Melbourne. He also provided plants at Maroondah monthly meetings. In addition he was often listed as a speaker at public meetings throughout Victoria.

The South East Region quarterly newsletter was also printed, and assembled by a group of volunteers, from the Rogers household for many years. It gradually grew to 1500 copies. It would have been a time consuming task. An addressograph was purchased in September 1966 to make the post out much easier due to increased membership.

Fred was also involved in the formation of the federal body known as the Australian Society for Growing Australian Plants (ASGAP) in 1962. He attended the first meeting in Brisbane (1962), and subsequent conferences in Sydney (1963), Sydney (1965), Melbourne (1967) and Adelaide (1969). He was elected Federal President in 1967 for the following two years.

Fred was also instrumental in having two reserves in the Ringwood area created to preserve local flora. One was Wombalano Park and the other, a patch of remnant bushland opposite the Heathmont railway station, later named The FJC Rogers Reserve. In addition, the Council erected a plaque in the Horsham Botanic Gardens to acknowledge his promotion of Australian plants in the Wimmera.

Fred Rogers, with his wife June and youngest daughter, came to live at Vectis in January 1976. Fred had been appointed Principal of Horsham West Primary School.

Fred brought with him a love for Australian native plants and botanical expertise that could not bematched by anyone else in the Wimmera. He took every opportunity to promote the growing of Australian native plants through speaking to students, parents of students, fellow teachers and others.During Term 2 of 1976 he ran a course on Native Plants for the Horsham Learning Centre.From this course and his contacts at school, he was able to initiate the idea of forming a Wimmera group of The Scociety of Growing Australian Plants.

Fred worked hard to promote the formation of this group by ’letter drop’, advertising in the paper and speaking to people whom he already knew had native gardens.

In August 1976, Fred chaired the first meeting in the Library of Horsham West Primary School of “The Society of Growing Australian Plants – Wimmera Group”.

Forty four people attended the meeting- a product of Fred’s hard work in getting the group off the ground. Fred was elected interim President and Royce Raleigh was elected interim Secretary. For the next few months, Fred organised meetings and garden visits. In March 1977, the group was formally formed with Fred being elected President – a position he held for 5 years, and Royce Raleigh was elected Secretary- a position he held for 9 years.

Fred was responsible for organising meetings & activities. There were excursions to various gardens, nearby Parks (Grampians, Black Range, Arapiles and Little Desert), the Nature Shows in the Horsham High School (an annual event for several years), school excursions to these shows and Plant Identification Nights.

Since the group’s inception, Fred was a member of the Committee. He willingly supplied to members the correct spelling of plant names and was able to identify many species of native plants. At meetings, he always ensured that members gained knowledge.

Fred took every opportunity to promote the Group and was often guest speaker at various garden clubs throughout the Wimmera including Birchip, Donald and Kaniva.

In 1995, as Fred, Royce Raleigh and Paul Kennedy all had an interest in Hakeas, they had planned a large seminar on the species. Sadly Fred passed away before the event, which was then dedicated to him.